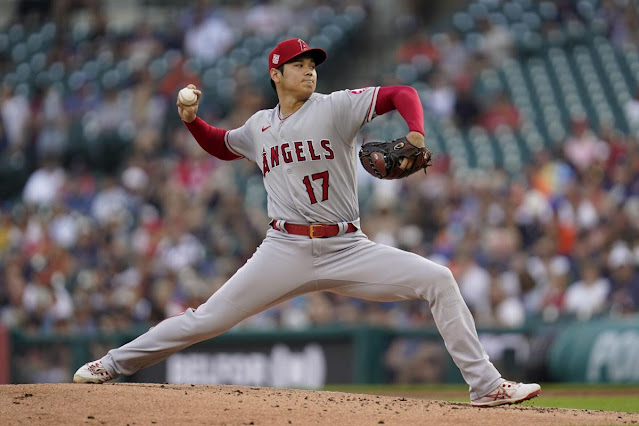 Shohei Ohtani (8-1, 2.79 ERA) has won four straight pitching starts for the Los Angeles Angels and is 7-0 on the mound since his last loss May 28.
The woeful Orioles have dropped 19 consecutive games.
On paper, their matchup in Baltimore could not be more lopsided.
Ohtani, the Angels’ two-way superstar, is coming off his best mound start of the season, an eight-inning, 90-pitch gem at Detroit last Wednesday. He also leads the majors with 40 home runs.
Baltimore has the longest losing streak in the majors since Kansas City dropped 19 straight in 2005.
The Orioles have yielded at least eight runs 12 times during the skid and been outscored 163-55. Winless since Aug. 2, Baltimore is two losses short of matching the franchise record for successive defeats (set in 1988) and is within striking distance of the modern-day record of 23 in a row, held by the 1961 Philadelphia Phillies.
“This is incredibly challenging and a huge gut check,” manager Brandon Hyde said. “We’re trying to keep our spirits high.”

BACK IN THE LINEUP

Mets ace Jacob deGrom is due for another MRI and could begin a throwing program if he’s cleared by Dr. David Altchek. The right-hander has been out since July 7 with right forearm tightness, and acting general manager Zack Scott said Tuesday he will rely on Altchek’s opinion to determine if deGrom can start a throwing program with an eye toward a return this season.

The two-time NL Cy Young Award winner was transferred to the 60-day injured list last weekend and isn’t eligible to return until Sept. 13. Even if he’s cleared to resume throwing this week, Scott doesn’t anticipate deGrom being ready for game action by that date.

The 23-year-old Cabrera is 3-4 with a 2.93 ERA in 13 starts at three minor league levels this year. He was sidelined early in the season by a biceps injury.
The right-hander is 19-25 with a 3.54 ERA in five seasons in the minors with 361 strikeouts in 341 innings.
Gray, also 23, is set to make his sixth career start and seventh appearance. He is still looking for his first major league win after going 0-1 with a 2.86 ERA in four starts since being acquired by the Nationals from the Dodgers in the blockbuster deal that sent Max Scherzer and Trea Turner to Los Angeles at the July 30 trade deadline.

Yadier Molina, who said he didn’t enjoy being a free agent this offseason, is set to finish his career with the Cardinals.

The starting catcher for St. Louis since 2004 agreed Tuesday to a one-year contract for 2022, which is likely to be his final season.
The 39-year-old Molina is a .280 career hitter with 2,089 hits, 397 doubles, 168 homers and 983 RBIs. He has played in the postseason 11 times, with 101 career hits, and helped the Cardinals to two World Series titles.
His 2,080 games behind the plate are the most of any catcher for one team.