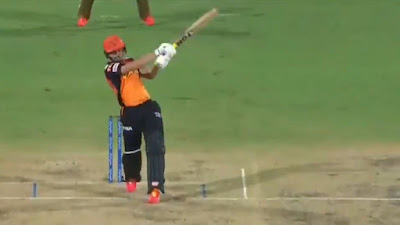 Coming in to bat at No. 7 in the penultimate over with 38 runs needed to win off 12 balls, Samad pulled his first delivery for an eye-catching six to become a source of amazement for one and all.

Having ran a couple of runs on the next delivery, Samad made the most of Cummins missing a yorker only to be his down the ground for another six. While Samad’s 8-ball 19* wasn’t enough to win the match for Hyderabad, he once again gave glimpses of his big-hitting abilities.

Despite a 92-run partnership for the second wicket between Manish Pandey (61*) and Jonny Bairstow (55), Sunrisers failed to seal the chase primarily due to lack of support from their other batsmen. With bowling figures of 4-0-35-2, Prasidh Krishna was the pick of the bowlers for the Knight Riders. In addition to Krishna, the likes of Cummins, Andre Russell and Shakib Al Hasan picked a wicket apiece.

Earlier, Kolkata had posted a dominating 187/6 in their allotted quota of 20 overs on the back of a 93-run partnership for the second wicket between Nitish Rana (80) and Rahul Tripathi (53) after Sunrisers captain David Warner won the toss and chose to field.